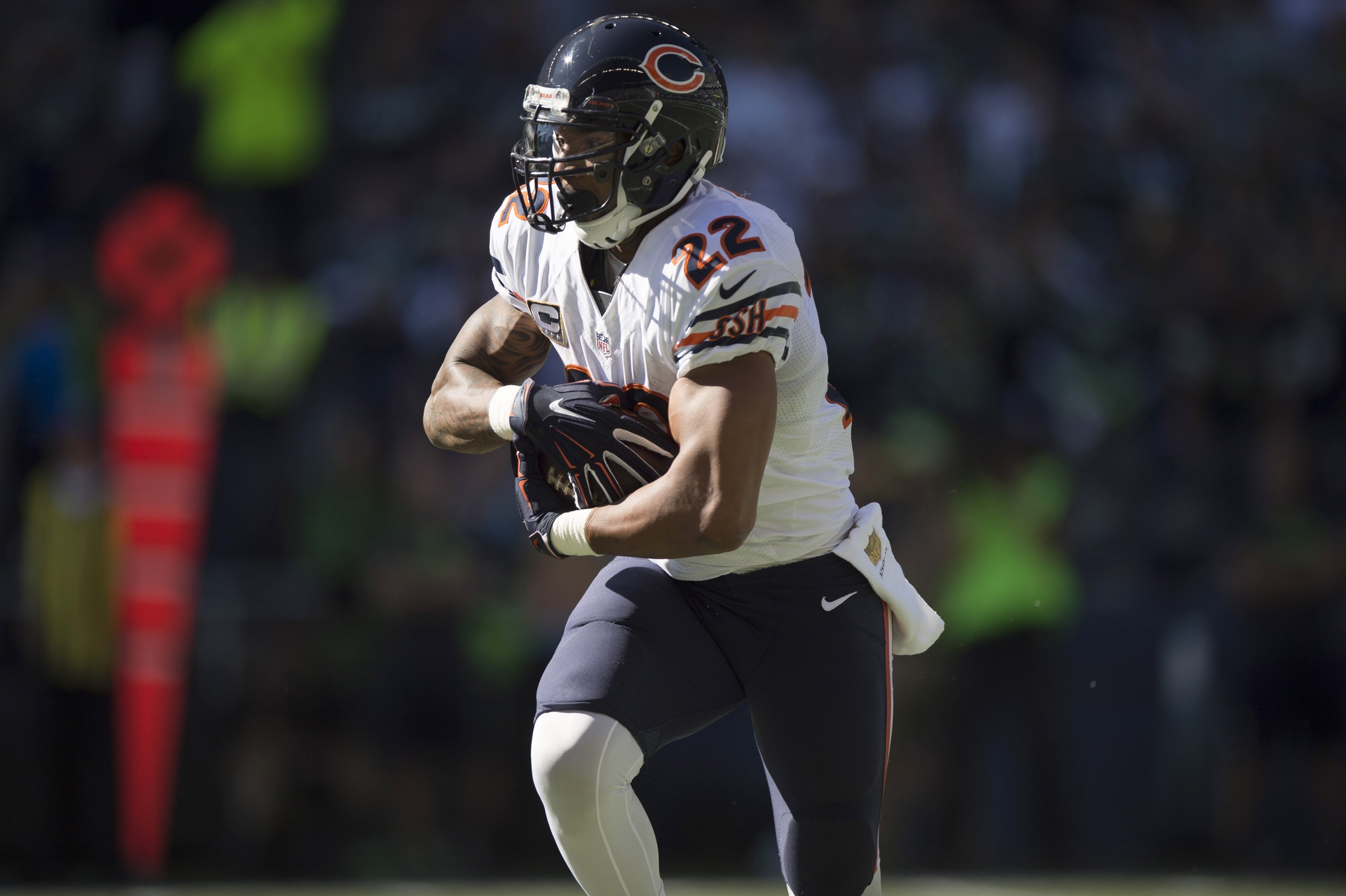 The days of bruising running backs in the NFL like Larry Csonka, Craig “Ironhead” Heyward and Jerome Bettis are fading. Not long ago, the ground game was king. The winning formula was to control the line of scrimmage, pound the pigskin between the tackles and avoid turnovers. To some extent, little has changed. However, the league of today is extremely pass-heavy with QB’s on teams like the Lions, Steelers and Saints dropping back over 40 times per game.

But when Mother Nature leaves it all on the field, coaches look to their sure-handed backs. Snow or rain, passing touchdowns decrease substantially while the battle in the trenches determines the outcome.

With help from NFLWeather.com’s Historical Analytics, let’s look at the Top Five toughest mudders in the NFL. In order to qualify, a running back must have played in a minimum of three foul weather rain or snow games over the last two seasons. You won’t see Adrian Peterson on this list, having only played in two rain games even though he rushed for over 100 yards in both outings.

The eight-year veteran has been a staple in the Chicago Bears offense since the day he was drafted out of Tulane. While doubters believe the 29-year-old Forte is on the decline, the last two seasons he’s arguably been the most reliable RB in the NFC, fumbling the ball only four times. In the four rain games since 2013, he never once turned over the rock, carrying the ball 92 times for 423 yards (4.6 ypc) and two touchdowns. By holding onto the ball, the Bears are 4-0 in muddy matchups.

When Lacy is healthy, he’s an absolute force who barrels over any sorry fool to stand in his way. The three-year back is a mirror image of former-90’s great, Natrone Means. Both were exceptional in the red zone, on the goal line or in any third or fourth-and-short situation.

Over the last two seasons in poor weather matchups, the Packers are 2-0 when Lacy gets 20+ touches. The former University of Alabama standout racked up 364 yards on 73 touches (5.0 ypc) in four rain games including six rushing touchdowns, all of which were scored in the red zone. In a late-November matchup against rival Minnesota, Lacy caught the game-winning 10-yard touchdown reception to down the Vikings 24-21.

Eli Manning takes a lot of grief from the media but the guy throws a ton of picks. Surprisingly, when the Giants backfield takes pressure off Manning’s shoulders, the team thrives. In rain and snow since 2013, the Giants are 3-0, pounding the football 35 times or more. It doesn’t matter who the Giants have in the backfield because whether it was Rashad Jennings, Andre Brown, Jerrel Jernigan or even (believe it or not) Peyton Hillis; each back was relatively successful. 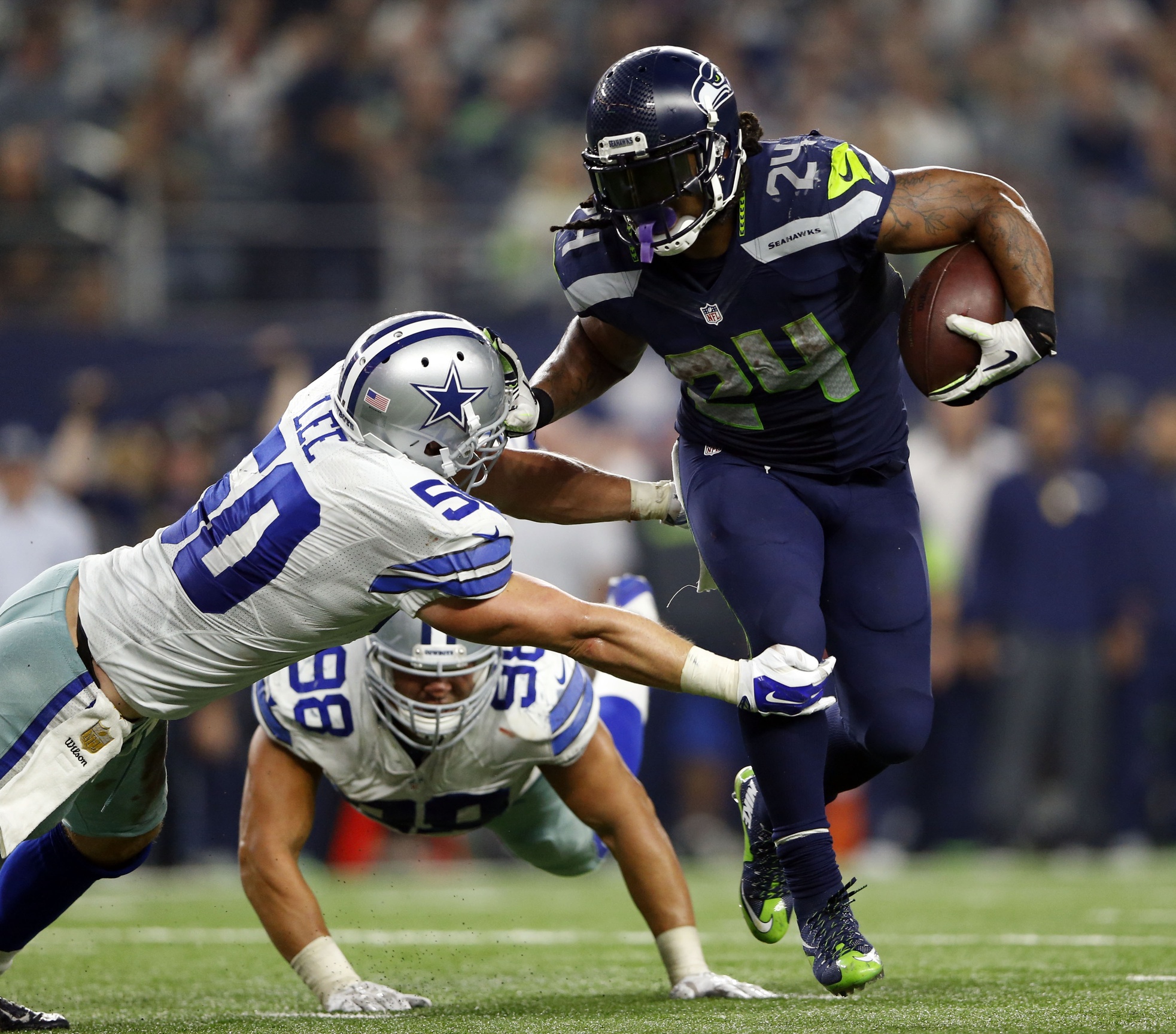 In a week three matchup last season against Houston, the Giants amassed 193 rushing yards on 42 carries (4.6 ypc) with Jennings accounting for 176 yards on 34 touches with a TD. In a pair of 2013 weather-impacted matchups, Brown rushed for 115 yards on 30 carries and a touchdown in a 24-20 narrow win over Oakland (Jennings as a Raider had 20 touches for 88 yards in the loss). A few weeks later, Jernigan found the end zone in a week 17 victory over Washington while Hillis, Brown and Jerrel ripped through the Redskins defense for 124 yards.  The one time Tom Coughlin abandoned the run in the rain, the team was trounced 38-17 at Seattle.  So why doesn’t Coughlin run the ball when the sun is out?

Prior to Deflategate, “Beast Mode” was the most talked about, celebrated and/or hated player in the NFL. Instead of remembering Lynch as the Skittles-popping, media-dodging maniac, remember him as the guy with the greatest stiff-arm of all-time in the 2013 playoff victory over New Orleans where Lynch broke seven tackles, threw Saints defensive back Tracy Porter to the ground like a ragdoll then calmly finished off a 67-yard touchdown run. Everything about it was glorious.

It is no surprise a bruising back like Lynch is an ideal option when the weather takes a turn for the worse, especially in Seattle where rain is as much a part of the city as Pike Place Market. However, since 2013 the Seahawks have surprisingly only competed in three rain games but when Lynch got his 20+ touches, Seattle went 3-0. Averaging 4.4 ypc in the ‘Hawks three rain wins, the 29-year-old scoring eight touchdowns and rushing for 305 yards on 70 carries.

This was a no-brainer. Charles is the perfect back for rain, snow, sleet; you name it, he’ll roll right through it and find the end zone. He’s fast, powerful, has tremendous acceleration and phenomenal field vision. When the former University of Texas RB gets 90+ yards and scores in a game with poor conditions, Kansas City is 3-0.

In four rain games, Charles averages an astonishing 6.6 yards per carry. The 28-year-old has racked up 444 yards on only 67 carries and four touchdowns. It’s clear that Charles was the heart and soul of the Kansas City offense, having recorded over 200 rushing attempts in each of the last three seasons despite missing the rest of this season with nagging injuries to his back, ankle, shoulder, hamstring and foot. Even with all the setbacks, Charles is expected to return next season and will still be the clear-cut top back in the league when the rains come pouring down.